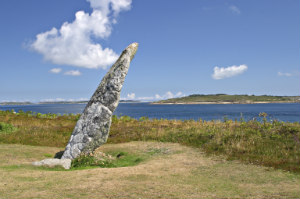 Archaeological evidence suggests human presence in these islands for at least the past three thousand years. The early landscape of Scilly would have looked rather different to that of today. The archipelago in circa 3000BC comprised three landmasses: the first and largest of which would have been densely wooded, covering the area we know as St Mary's, St Martin's, Tresco and Bryher; the second area in size covered Agnes and Gugh; and the third area approximated to the Western Rocks.

Nomadic Mesolithic hunter-gatherers eked out a rigorous existence using rough flint tools, some of which can still be found on the beaches and in the fields of Scilly. Gradually, the Neolithic and Bronze Age islanders cleared the land and settled in the islands, forming a well-populated, self-sufficient community.

The 'entrance graves' or 'chambered cairns' around the islands bear witness to this period of Scillonian prehistory, including ritual monuments, burial places and small settlements of circular stone houses like those on Nornour. The Isles of Scilly Museum on St Mary's has pottery and other artefacts found at some of these sites, notably the urns from the Knackyboy chambered cairn, some of which contained cremated bones. Similar pots, broken in domestic use, come from middens (rubbish tips) at Halangy Porth and Nornour. Other early monuments, which probably had a religious aspect, are the standing stones such as the Long Rock and the Old Man of Gugh, and the smaller 'statue menhir' from Chapel Down, St Martin's.

In the later first millennium BC more signs of the outside world appear: styles of pottery familiar from the mainland such as the jars with curvilinear decoration and bowls of finer ware from Nornour. The first signs of conflict also belong to this period: the defended 'cliff castles' of Shipman Head and Giant's Castle, and the sword and shield in the Bryher burial. 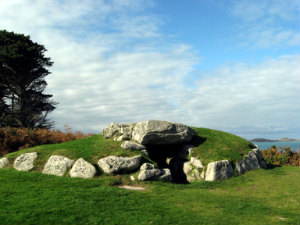 The Bryher cist, dating from about 200 BC, also contained a decorated bronze mirror - one of the oldest mirrors in Britain - and other metal objects and evidently belonged to an important personage, in contrast to the peasant communities seen in the other known sites. This is the richest grave deposit known, but burial in cists was traditional in Scilly and continued into the Roman period.

During the first to fourth centuries AD, people continued to live in prehistoric-style huts such as those on Halangy Down, where the excavation finds show little Roman influence beyond a few imported pots and brooches from other provinces. However, the altar of classical type, now in Tresco Abbey Garden, was made of local granite. The Museum has a superb collection from excavations on Nornour, today one of the Eastern Islands. Excavations there have uncovered stone huts originating in the Bronze Age and showing domestic use over a long period. But amongst the soil and rubble there were numerous finds, including nearly a hundred coins of emperors from Vespasian (AD 69-79) to Gratian (AD 367-83) and a large number of brooches of many different types, most dating from circa AD 70-200.

There are also fragments of several clay figurines, well-known standard products of factories in central Gaul in the second century AD. These portray two types of deity: the 'Pseudo-Venus' and the Dea Nutrix, which are versions of classical concepts adapted to the religious beliefs of the north-western Roman provinces. These objects were probably offerings at a shrine: figurines, brooches and coins have been found in votive deposits at Roman temples in Britain, France and Germany. Scilly would have been a port of call for ships going between western Britain and ports of the Channel and Atlantic coasts of Gaul. 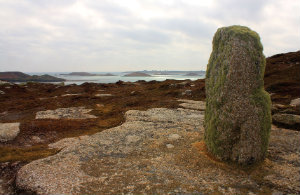 Archaeology is still the main source of knowledge about Scilly in the early medieval period. Settlements of the fifth-sixth centuries AD have been identified on Tean and Samson, and the presence of grass-marked pottery shows that occupation continued on Halangy. There is still much to learn about the early history and ecology of Scilly and apart from organized investigations, new knowledge can result from chance finds, provided that they are properly recorded. Objects, whole or fragmentary, appear from time to time as the result of erosion but they mean little if removed from their context.

If you find something of interest, please do not to remove it but to report it to the Museum or to the Conservation Officer. A sketch map, or photograph, or grid reference of the location would be very helpful.