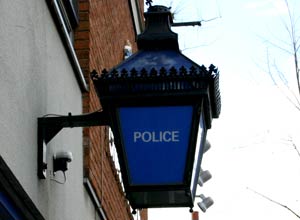 There is one small police station on the islands, which is at Garrison Lane on St.Mary's and is open from Monday to Friday 9.00am-10.00am. The Isles of Scilly neighbourhood policing team consists of Sergeant Charlie Craig, Constables Marc Blyth and Mat Collier, Community Support Officer Shirley Graham and Special Constable Merryn Smith.

The police generally deal with minor crimes such as mobile phone theft, noise pollution; dog fouling, fence/gate damage etc. The police station acts as a lost property office most of the time! The police recently acquired a speed gun as there is 9 miles of road on St.Mary's with a limit of 60 mph. However the fastest vehicle they recorded was a moped travelling at 34mph.

There are no police stationed on the off islands, but the St.Mary's officers make regular visits to the other islands usually sharing the doctor's boat. The police have their own radio show on the local station, Radio Scilly (107.9 FM), on a Wednesday afternoon.