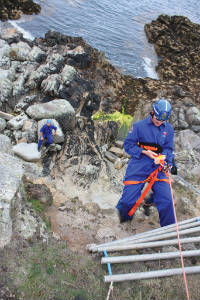 Her Majesty's Coastguard is a government service in the UK providing air-sea rescue. In the Isles of Scilly this is one of the most important and locally respected emergency services due to the nature of Scilly's vulnerable position in the middle of the Atlantic and also the topography of hills, cliffs and coastline.

The coastguard is made up of volunteers who practise every month by staging cliff rescues and searches. Each island has its own station officer and crew of around 8. In the event of a serious incident, teams from other islands will be called in to support the islands own crew. Call outs include persons missing at sea or around the coastline, walkers and animals who slip from coastal paths, fire onboard a boat and vessels in trouble. Another responsibility of the Coastguard is to report the presence of pollution or hazards on shore.

Coastguards need to be between 18 and 65 years and live within 30 minutes of the rescue station - not a problem on the islands as most crew members will live within 5 minutes of the station. The coastguards are people from all walks of life and either part time or full time employed as the commitment to the coastguard is in emergency situations only. Coastguards carry a pager which alerts them to an emergency call out, and they meet at the rescue station where full details of the incident are dispatched.