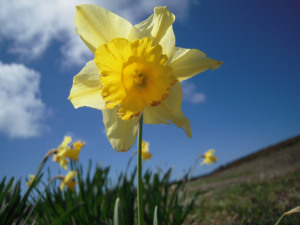 Whatever the season you will find Scilly has an eclectic mix of flora and fauna. In spring Scilly is a profusion of citrus colours in cultivated fields and amongst the hedgerows, with Narcissi (commonly daffodils). Because of the mild climate in the isles, Spring comes early in Scilly with the first bulbs flowering in February.

There are flower farms on St.Mary’s, St.Martins and St.Agnes and so daffodils are synonymous with Scilly and are exported to the mainland by boat or helicopter. Soliel D'or is one variant which are beautifully scented. Enjoy the brilliant shades of sunshine yellow by wandering the farm lanes in the early months of the year and relish, as best articulated by Wordsworth "a host of golden daffodils…fluttering and dancing in the breeze." 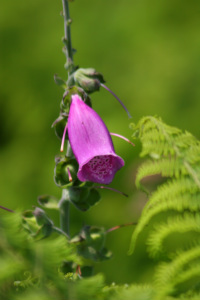 Bermuda buttercup are commonly found in the bulb fields too. Puja plants flower in Spring in the Abbey Gardens, a fantastic spectacle from the Andes Mountains in Chile which produce high spikes yielding large jade green flowers, with bright yellow or orange stamen. By the end of April Thrift colours the cliffs, a small bulbous flower head on a long stem often called sea pinks as they grow close to the coastline. By May the Bluebell are in season, which embellish the fields and roadsides with a splattering of purple tones and are often used as decoration for the islands May Day celebrations.

In early summer, Foxgloves grow amongst the hedgerows and bramble; which are a cerise tubular flower head on a thick spike and also Rosy Garlic (an edible species of garlic) are widespread. Spring and summer are generally rich with wild flowers including Yellow Iris, Royal Fern, Purple Loosestrife, Water Mint, and Hemlock Water-Dropwort and also in wet areas, Bog Pimpernel, Bog Stitchwort and Marsh St.John's Wort grows. 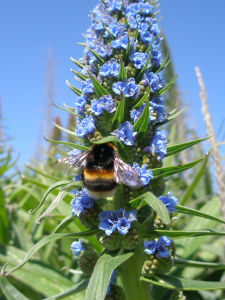 Scilly summers bring Common Cats Ear, Eyebright and Babington Leek. In gardens giant Echium are common which grow to a staggering five metres tall with a cornucopia of lilac buds amongst pointed emerald leaves. June is the month for Veronica (or Hebe) native to New Zealand and ranging in size from small shrubs to trees with violet flowers arranged in spiked inflorescence. Hottentot Fig, a succulent species that will grow on sandy flats is prevalent and distinguishable by fuchsia or canary yellow flowers with a mass of spindly petals. Another kiwi genus familiar in Scilly is New Zealand Flax, the tough sword shaped leaves grow upto three metres long, and the flower stalks up to five metres long, towering above the foliage and bearing pipe shaped, vibrant red flowers. July is the month for Balm-Leaved Figwort, Bear's Breeches from the Mediterranean and the South African Agapanthus. White and purple agapanthus are established on the islands, both deciduous and evergreen with a base of broad, strappy leaves and a bouquet of bell formation flower heads. Japanese Knotweed is profuse in late summer, with its truncated oval leaves and slender stems supporting cream or white blossom. Between September and November you'll find the Belladonna Lily another South African species, which has clusters of trumpet shaped pale pink flowers on a leafless stalk. 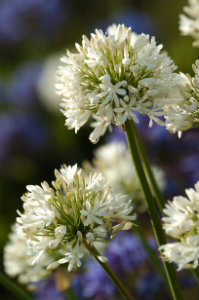 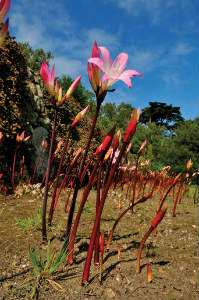 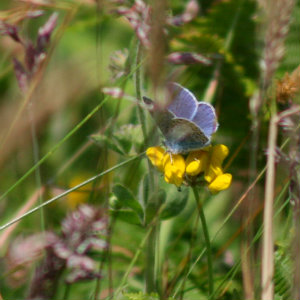 On the heathland of Scilly you will see an abundance of Bracken- large coarse ferns, Gorse- the spiny evergreen shrub with coconut scented yellow bloom, Bramble which produce blackberries in Autumn, Bell Heather- a low lying shrub with slightly prickly needle-like leaves, Milkwort- with green outer sepals and blue inner sepals, Camomile – a daisy like plant in appearance with a distinctive scent and Honeysuckle a twining vine with incredibly sweet fragrant nectar. Other smaller flowers include Lousewort and Yellow Tormentil. On the cliffs there is Yorkshire Fog- a grass with velvety leaf, Red Fescue- a tuft forming grass with wiry leaves, Sea Beet- edible wild spinach, Sorrel- a herb with juicy stems and edible leaves that often turn crimson at the ends and Buck's-Horn Plantain which has ribbed leaves, a hairy stem and brown oval head encircled with white stamen. Some large growths of Mesembryanthemum can also be found, which is a succulent with carpet like growth and vivid flowers in an array of white, lemon, apricot, peach, blush and crimson. 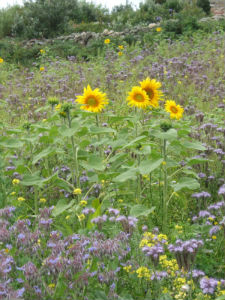 Rare species found on the Scillonian islands include Dwarf Pansy which you have to hunt for on hands and knees as they are minute and the heads hang downwards- the leaves are dark green with a violet tinge. Also Shore Dock with greyish green leaves and tiny green or reddish brown flowers, and three varieties of buttercup- Prickly-Fruited, Small Flowered and the Hairy Buttercup. Other national rarities include Cretan-Mallow, Western Fumitory, Western Clover and Late Cuckoo Pint.

Although there are not many native trees on Scilly you will recognise Elm and Elder, Hawthorn and some Grey Sallow. Hedgerows were planted a century ago as windbreaks to protect the crop fields and to survive a bettering from storms and sea spray it is necessary to have sturdy roots and be a species that can withstand salt and gusts. Pittosporum from New Zealand is perhaps the most common, but also Hedge Ragwort, Escallonia, Euonymus and Hedge Veronica have been used. Tamarisk is noticeable in some places but does not provide very good shelter. 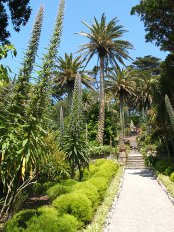 It would be remiss not to profile here the Abbey Gardens on Tresco -an exotic paradise, teeming with species from around the globe. Even in the winter, 300 plants will be in flower. Plants include Cacti, Date-Palms and giant, lipstick-red flame trees; rarities like Lobster Claw known as birds of paradise for their rainbow, flamboyant appearance. Also remarkable are brilliant Furcraea- a genus of succulent in rosette formation, Strelitzia with stately blue and white flowers and shocking-pink drifts of Pelargonium. And then Leucadendron-an evergreen shrub with spiraling leaves presenting a silvery tone, Banksia-Australian wildflowers known for their spikes and fruiting cones, Callistemon with cylindrical brush like flowers, Eucalyptus- a flowering tree with copious sap and Cape Heaths. Echium are distinctive by their imperial height and garlands of blue flowers and Aeoniums- tongue shaped leaves in a whirled structure, Passiflora (passion flowers) and Agave from Mexico with thick fleshy leaves, each ending in a sharp point and with a spiny margin. The summer months reveal a mixture of colour from Mesembryanthemum, Pelargonium (commonly known as geraniums)

and Watsonia- spears of orange splendor, Metrosideros- native to the Hawaiian islands and Abutilon-a broadleaf evergreen. Throughout winter months the Proteas- incredibly bulbous flower heads with pointed petals, Aloes and Tree Heaths are at their exotic best with blossoming Camellias.